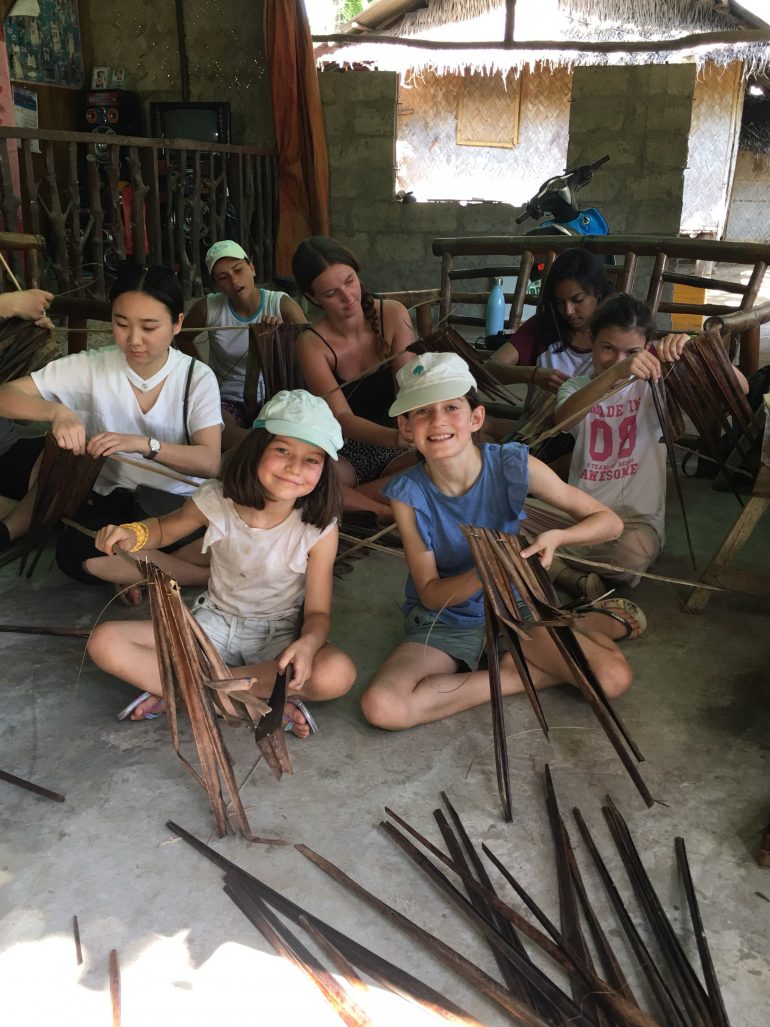 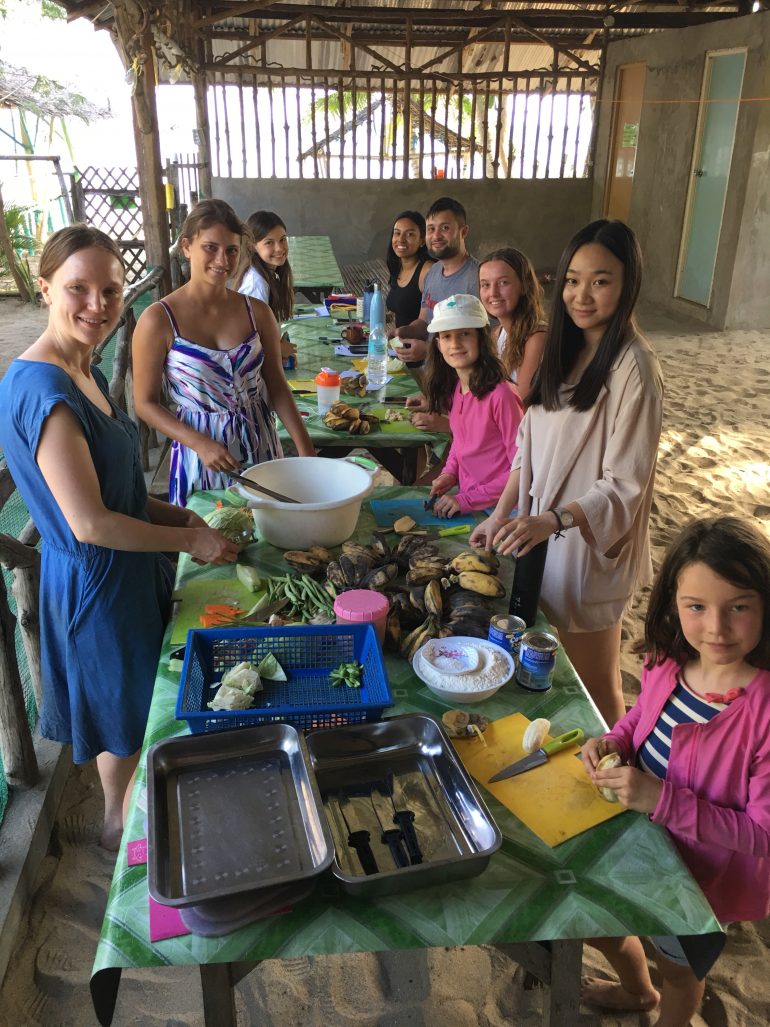 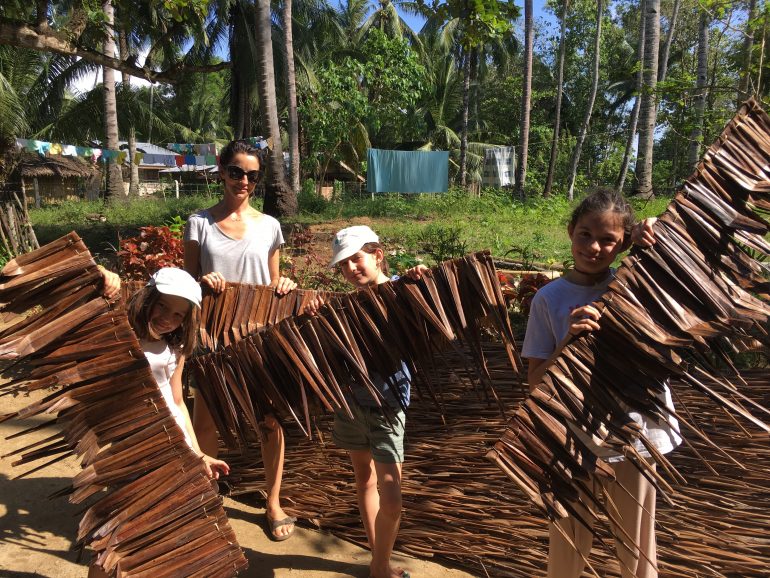 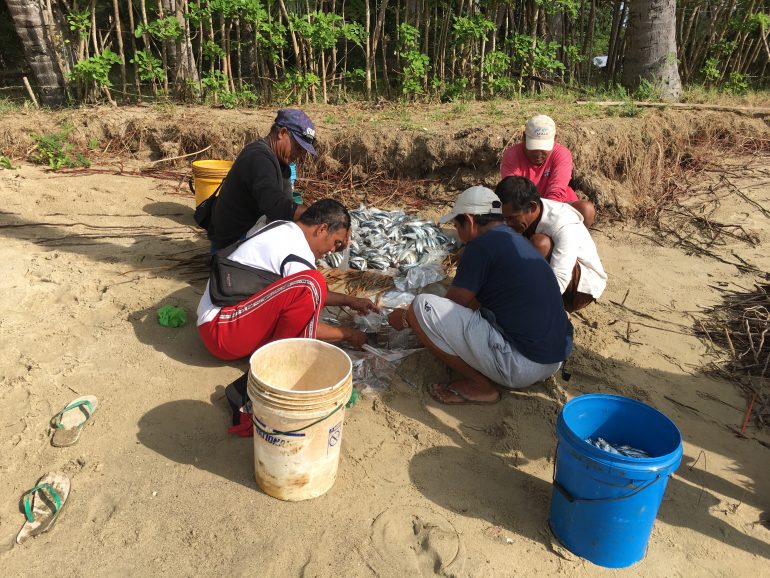 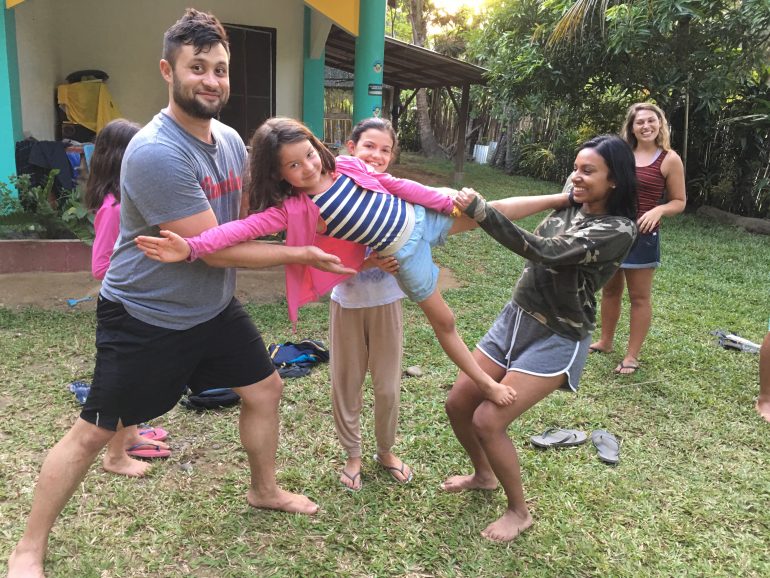 The first few days of most volunteering programs are given over to some time for getting to know the local culture, your fellow volunteers and generally settling in. Some volunteers were old hands, having been at camp for some weeks, namely the bearded Owen, who spends most of the time time laughing, and rarely puts a shirt on, Amber, a lovely, smiley blonde American who has been here for 4 months, as well as Michelle from Switzerland and various others, like Paolo, a wonderful, eccentric, older chap from Rome, chief reading resident of the hammock….

Miko was our master of ceremonies, and proceeded to organise a great few days of activities. Having met our fellow companions, heralding from everywhere from China to Canada, we spent a brilliant morning making roofing out of bamboo at a local neighbours house. Sold for 2 pesos a piece, this stuff is amazing, made from completely natural materials, can withstand almost four years of sun and typhoons, and is of course totally biodegradable. They had one serious piece of karaoke kit in the porch where we were weaving too- this is BIG in the Philippines, clearly: as I write, the dulcet tones of a shrieking villager singing along to some incomprehensible tune at 10pm pierce the sleepy silence – and soon enough, will make our friendly neighbours, a bunch of cockerels that ‘sleep’ behind our room, want to join the party.  Sleep is a different concept here, quite honestly.

Next was a village walk: everyone without fail stopping to say hello, smiles on their faces, as we walked first along a stretch of beach, seeing the fishermen sort through their daily catch, then along mud tracks past the local school, trying to avoid the falling coconuts (actually a serious and not entirely easy task), peering into actually rather well-kempt houses and huts, a surprising number of basic little stores selling sweets, biscuits, crisps, more sweets, fizzy drinks, and in case we hadn’t noticed, some more sweets. Fruit, despite finding ourselves in one of the most wonderful fruit producing countries in the world, is not cheap and nmot so readily available for the average villager. Sadly, junk clearly is: and the dental decay we’ve seen in the children in the nursery is quite simply unspeakably awful. More than a handful of five year olds in our class have less than a handful of teeth left….

My little bete-noire aside, in the scheme of things, it looks at least from the outside as a rather good place to live. We have yet to see any beggars, houses are left unlocked, and appear to have a fairly decent level of sanitation for the most part, there are fish in the sea and coconuts on the trees, electricity works most of the time, there is peace, there is karaoke, and there is a happy energy about the place, helped by the omnipresent ocean. A simplistic initial view that inevitably ignores a great deal, I know, but….

Further activities included a visit to lovely Nelson’s organic farm, where we helped him plant new seedlings for the next crop of wind beans, and he showed us around his bitter gourds, cucumber, tomatoes, aubergine and papayas. A fresh coconut water later, a goodly amount of time playing with his perfect new little puppies, christened Dobby and Lottie by the girls before it was time to get back into our trike, one or two volunteers gallantly offering to hitch a lift on the roof to save space, and back to base.

There, we joined our fellow friends once again: Michelle and Zoey, Chris and Steve from Canada, Laura from Finland, Katie from the States, Morgan a fellow Brit, Shannon, New Yorker Sri Lankan… and they really did become friends! ….. for a Tagalog language class (which Alegra, having her rolled her eyeballs at the plan, chose to spend sleeping in a hammock), and typical Philippine cuisine cookery class. This was banana fritters and veggie curry, which we didn’t get around to cooking ourselves because we were so occupied with wolfing down the banana fritters drenched in pancake syrup.

The following day was a city tour of Puerto Princesa, although I admit we saw little more than some butterflies, the cathedral and the Plaza Cuartel. There was more interest in getting the most AMAZING massage ever and a trip to a shopping mall, for pizza, milkshakes and bare necessities.

The final optional cultural trips were a visit to a nearby waterfall, which was pretty and lovely for a quick swim, and mainly fun for the trike ride, but relatively unremarkable. The other was a delicious ride out in a traditional fishing boat to a sandbar in the middle of the ocean, a perfect spot for a snorkel and sunbathe, in the searing heat: no jellies, no sandflies, and endless shells to collect. 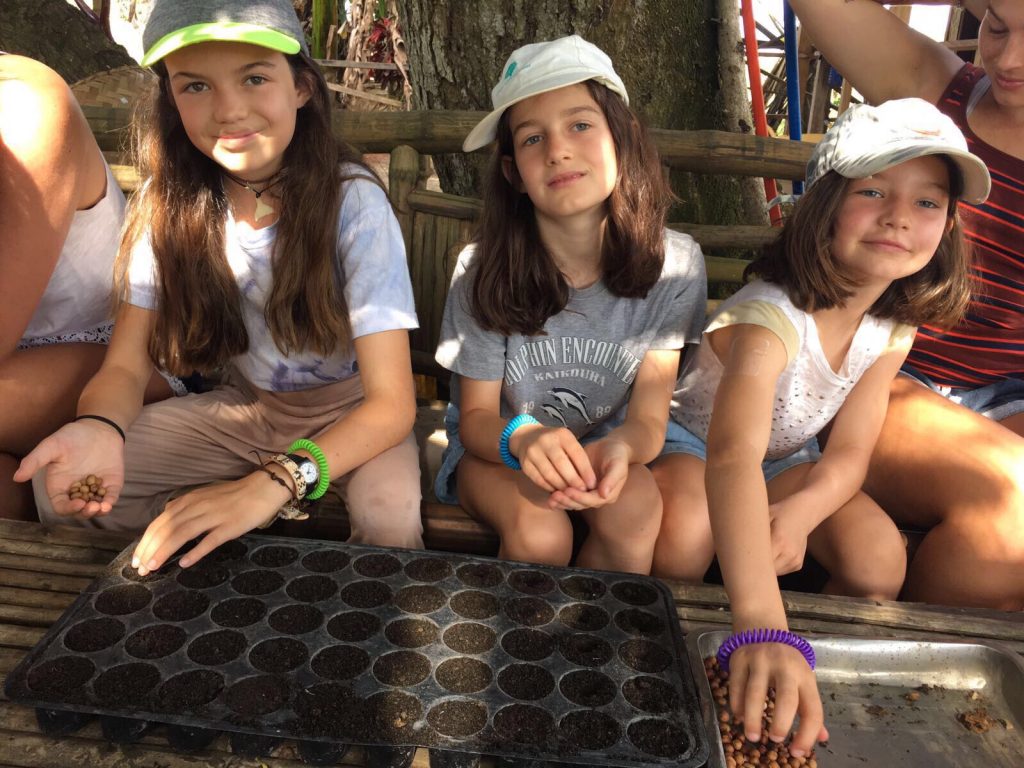 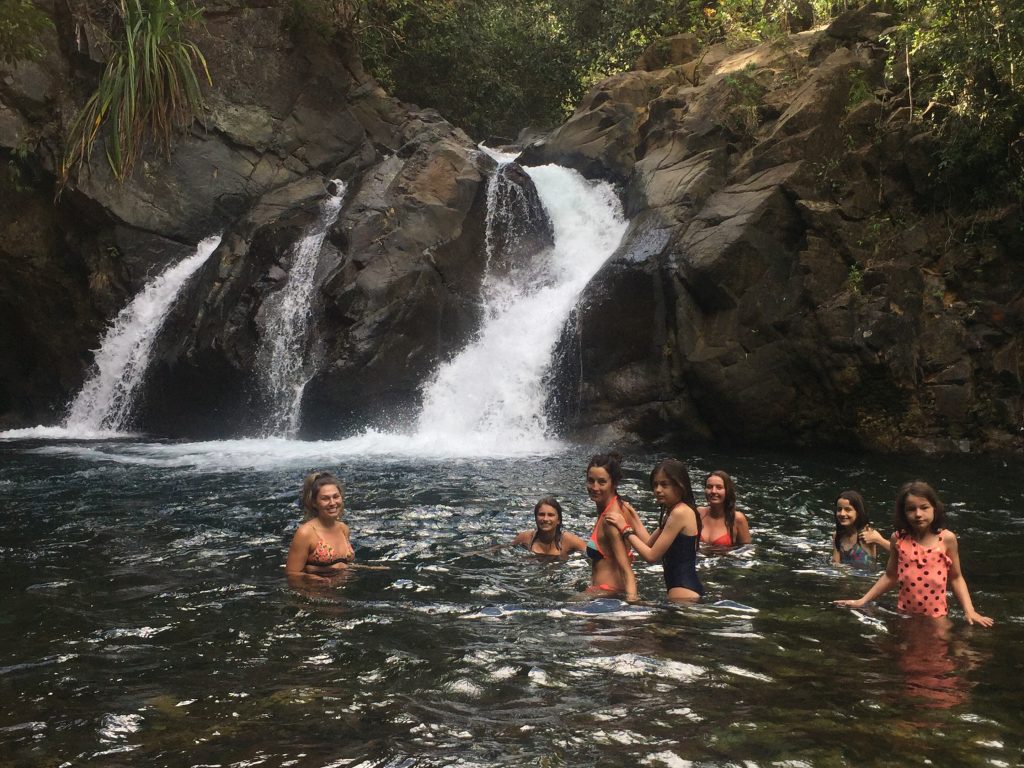 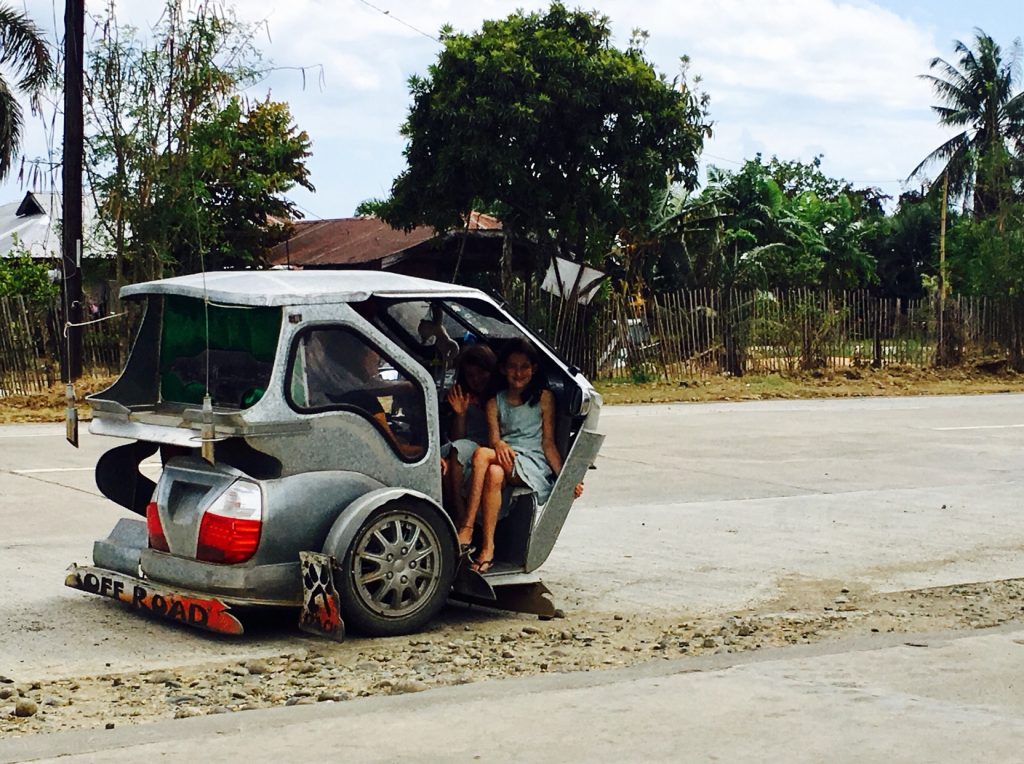 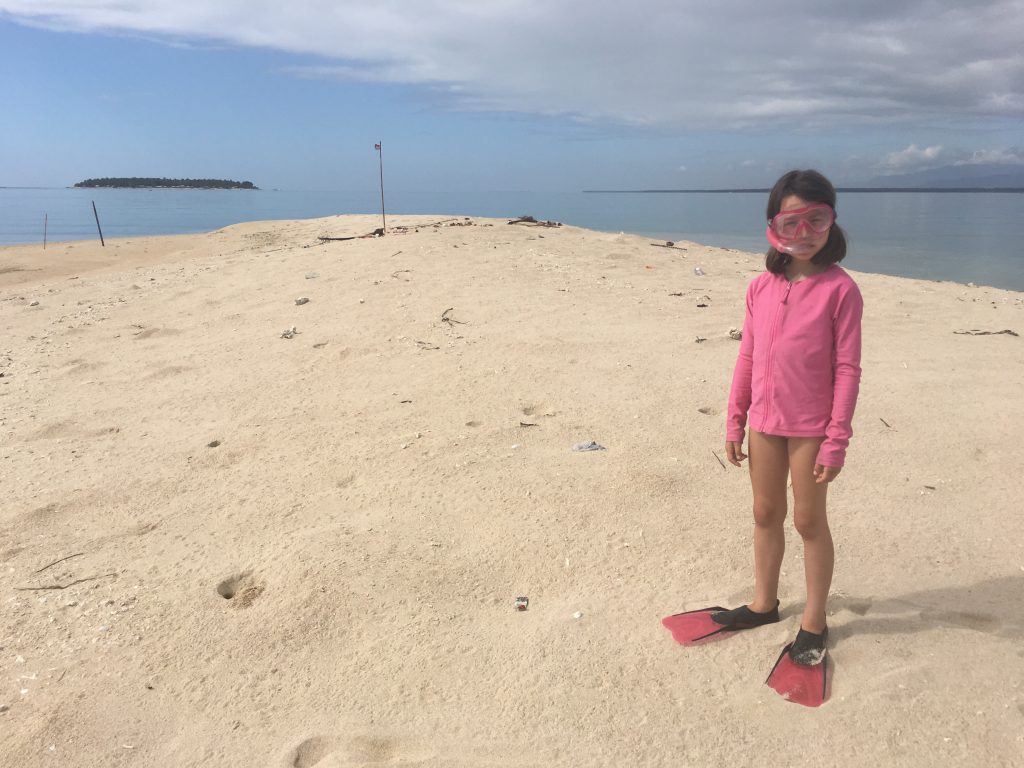 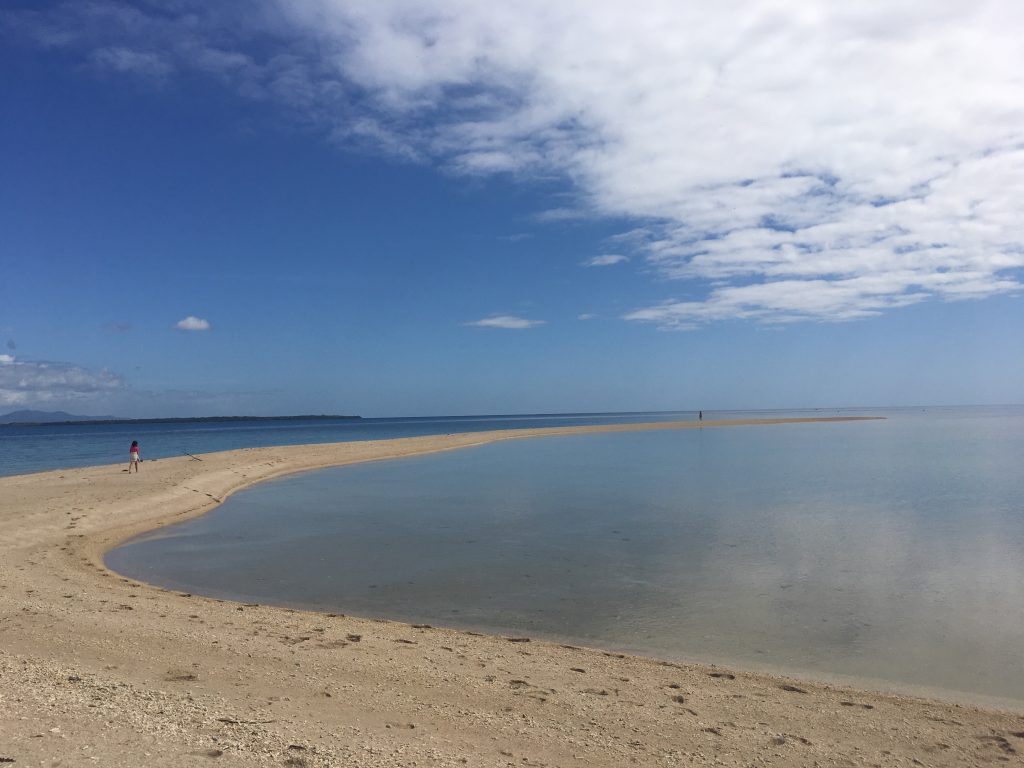