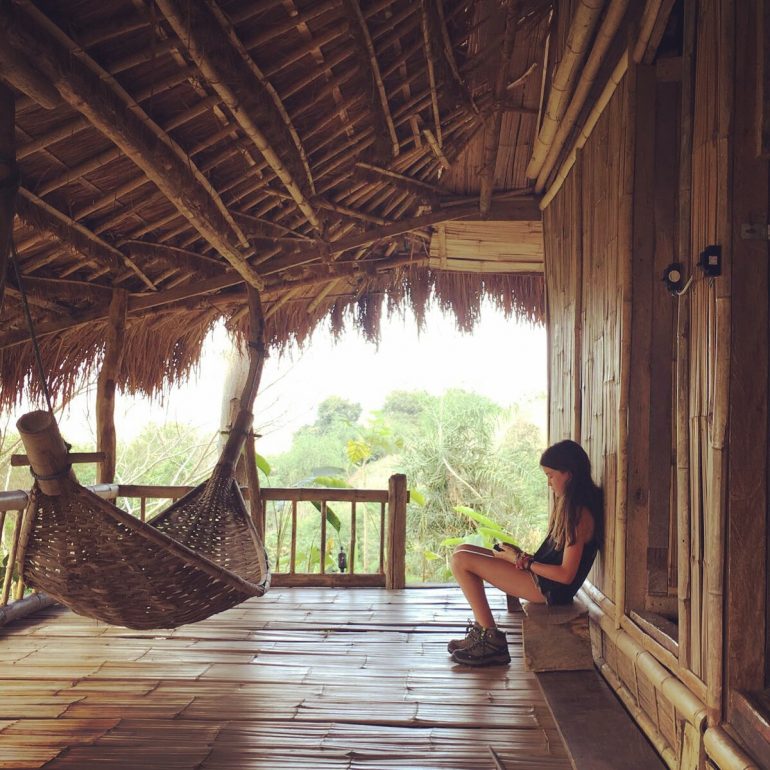 Our Bamboo nest with the hill-tribes in the mountains of Chiang Rai, and our ‘death walk’

The next stop after a brief night layover in Manila was a 4am flight to Chiang Rai via Bangkok. This was a defining moment: we had asked for wake up calls for both rooms in our Remington airport hotel. The two of us still getting dressed, at 3am walk in, hiking boots and backpacks in position, the three girls, ready for the airport, telling us to get a move on! We could hardly believe our eyes: better proof of under 12 Seasoned travelling I can’t imagine!

Rather the worse for wear we arrived in Chiang Rai and were collected by a trio of spectacularly scruffy but smiling Thai men, in their dusty pickup. Suitcases hurled in alongside the supermarket shop and two men on top, we squeezed in the cabin and made our way to the north of Chiang Rai to our hotel, Bamboo nest. What we hadn’t quite appreciated was how remote this was: our painfully slow driver wound his way up and out of the city limits, into a national park, past a depressing elephant camp of miserable looking elephants ready for tourists to ride on them, and onto dirt tracks that then turned into steep ravines, a narrow hair raising ride that somehow didn’t bode well. It was hot, we were tired, and we were going to live in a hut. The girls weren’t into it.

However, our hit was a thing of beauty. Completely made of bamboo by the local tribe, apart from a cement floor in the bathroom, no wifi, no 3G, it was a place for swinging in the hammocks on the terrace in the heat, overlooking rice paddies and the fabulous misty mountains. In the shared common room and dining area we met our fellow hut dwellers, all with interesting stories to tell: Canadian Lauren and Cam, a former extreme freestyle skier who has broken so many bones it is a miracle he is still on this earth, Peter and Marva, a softly spoken, cultured German couple who were taking their annual vacation from their guesthouse in La Cevennes.

The next day took us to a nearby waterfall, up in the hills past the Akha hill tribe village. We got lost almost immediately, which was to be expected with the directions (at the big bamboo, carry on), but we were guided the first part of the way by a wiry, toothless Thai, who marched us up the mountain at a breathless rate despite her advanced years. The spectacular Hue Kaeo waterfall was well worth the trek- over a rickety bamboo bridge, the higher section falling from at least 40 metres we bathed in the delicious cool despite monster mosquitoes hungrily awaiting our exit.

A drawing later, and an impromptu class by a guide who arrived with another tourist on how to make bamboo rings using a machete as though it were a nail file, and we began to make our way back under rapidly increasing cloud cover. Thunder and lightning rumbled ever closer, and sure enough, those tropical fat rain drops began to fall. And then they fell even faster, and faster, until we thought that maybe we should wait for it to pass under the shelter of some trees. So we stopped, just up from a narrow path, alone on a Thai mountainside, a ravine to the right, and trees and thick undergrowth and trees to our left. In hindsight, not an intelligent move. The rain now drove down like a sheet and that distant thunder came ever closer until the storm was directly overhead.

At this point, getting soaked despite our ‘shelter’ our instinct finally told us to MOVE. So as we moved down to the path, we heard noises that sounded like coconuts falling. But there weren’t any coconuts. As though in slow motion, the noise turned into the ominous ‘this isn’t happening’ sound of a tree trunk cracking, and we watched in horror as the very tree we were one second away from stepping underneath parted ways with the ground, split in two, and fell onto the path in front of us, very nearly taking the girls with it had it not been for Alberto’s rapid reaction. Soaked to the skin, the rain now poured, the path was blocked, we were alone, and this didn’t look good at all. It was the perfect recipe for a mudslide or further tree fall, so we clearly needed to move our asses out of there. The girls were terrified, and amongst their cries of ‘I don’t want to die’ Alberto gathered his wits and led us up the mountain, scrambling up through mud and roots to try to bypass the fallen tree before another came down to squish us properly. It was a hairy moment, but we managed, scratched, soaked,freezing and shaken, to rejoin the path and make it to the tribal village to wait for the storm to pass under real cover. Imaginary headlines of ‘group of tourists trapped in Thai mountain mudslide’ now receding, we have never imagined to be so grateful to get back to our hut.

Next stop was a short stay in Chiang Rai, staying at the Nak Nakara hotel, with a visit to the White temple, a veritable wedding cake, and the more interesting, in our view, Black House. Created by Thai artist Thawan Duchani, it houses an eclectic collection of Thai art pieces and mementos, in a number of different buildings and shady gardens. A fine way to spend the afternoon.

From there it is a short drive to visit the hill tribes. Something of a tourist set up, but worth it for the girls, you walk around the site of five different tribal villages, who showed us their different traditions and weaving. The most remarkable perhaps, the Karen tribe with their coils of copper wound around their necks and below their knees- up to 3 kilos weigh their collarbones down, bruising and weakening them to such a degree that it gives the appearance of a significantly elongated neck and some horribly squashed knees. They spend their days weaving and trying to sell their wares to tourists, a bit like monkeys on show in a circus, but the proceeds do appear to genuinely go to their whole communities and towards keeping their traditions alive….

The final stops before an early start to Laos were the night market, designed for tourists but absolutely worth a visit, with its laid back food stalls and clothes- bargain hard- and the brilliant Saturday night market: very much a local affair, complete with group dancing around in circles to extra loud traditional Thai music, teeming streets, filthy bouncy castles and hundreds of food stands selling everything from pad Thai and dim sum to fried crickets, worms and beetles, much to the girls disgust and delight.

Thailand was short, but busy: and now, to the much awaited Land of a Thousand Elephants, The People’s Republic of Lao. 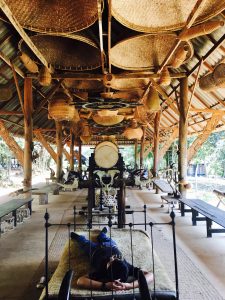