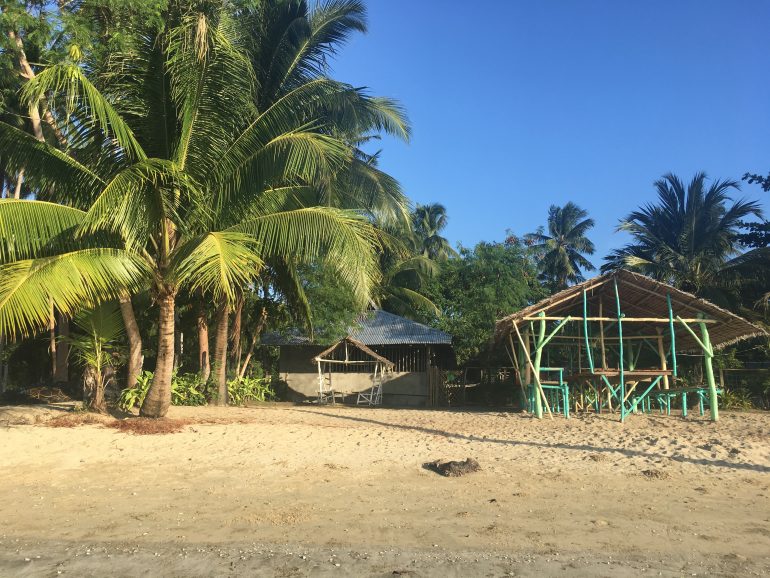 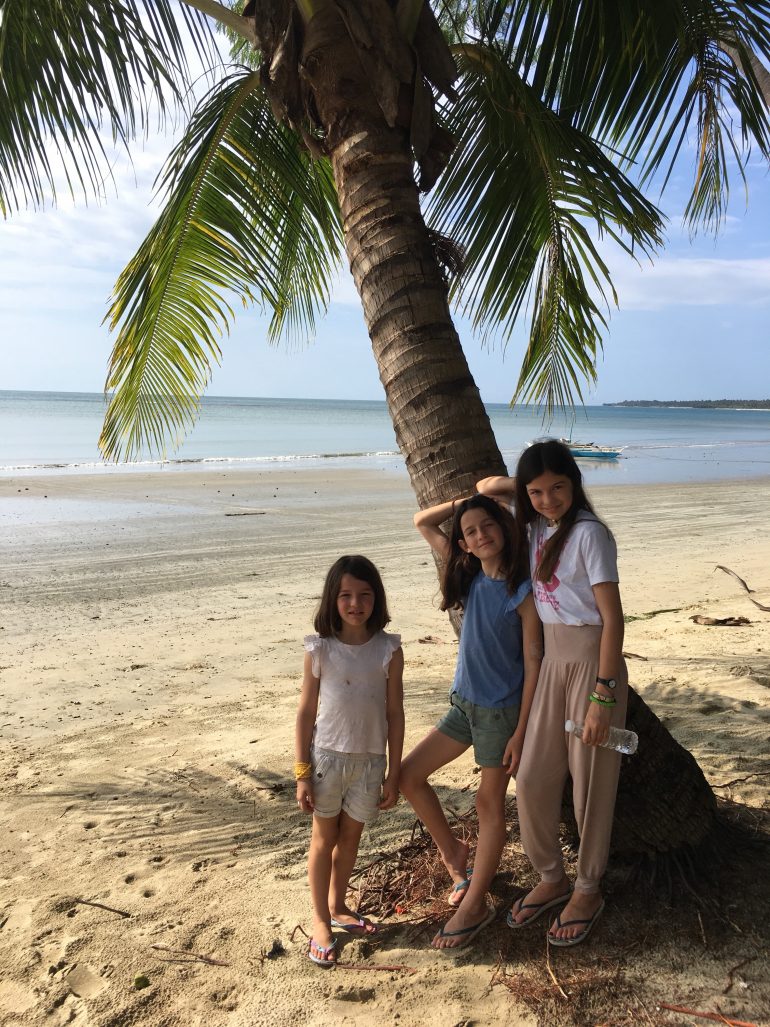 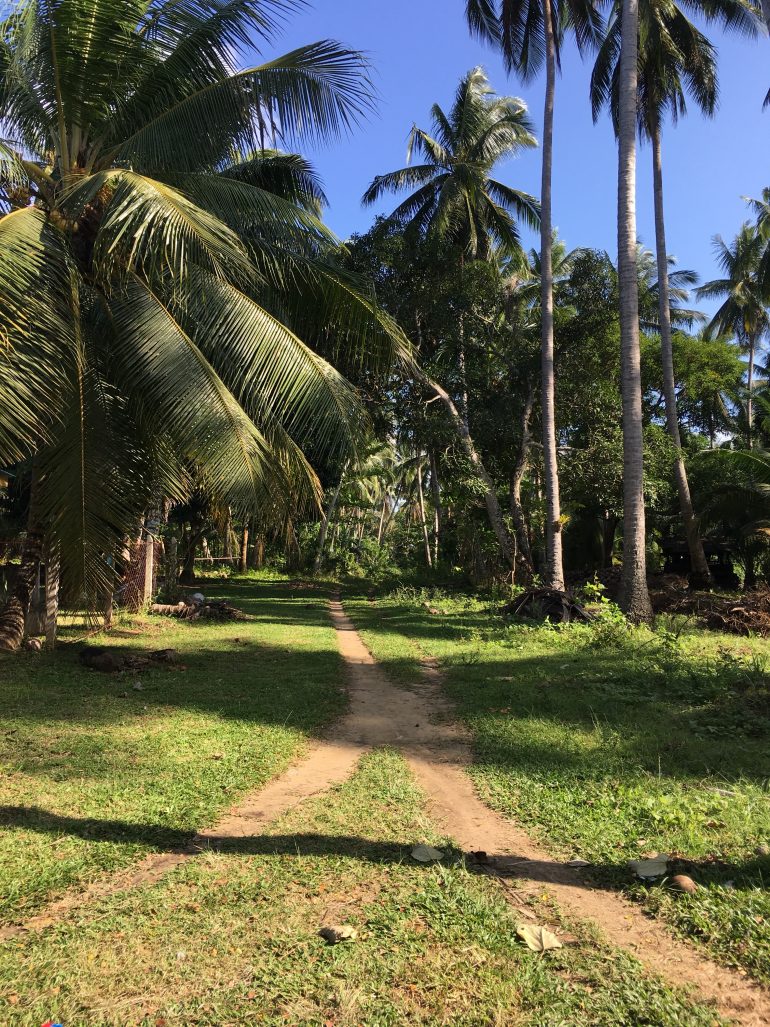 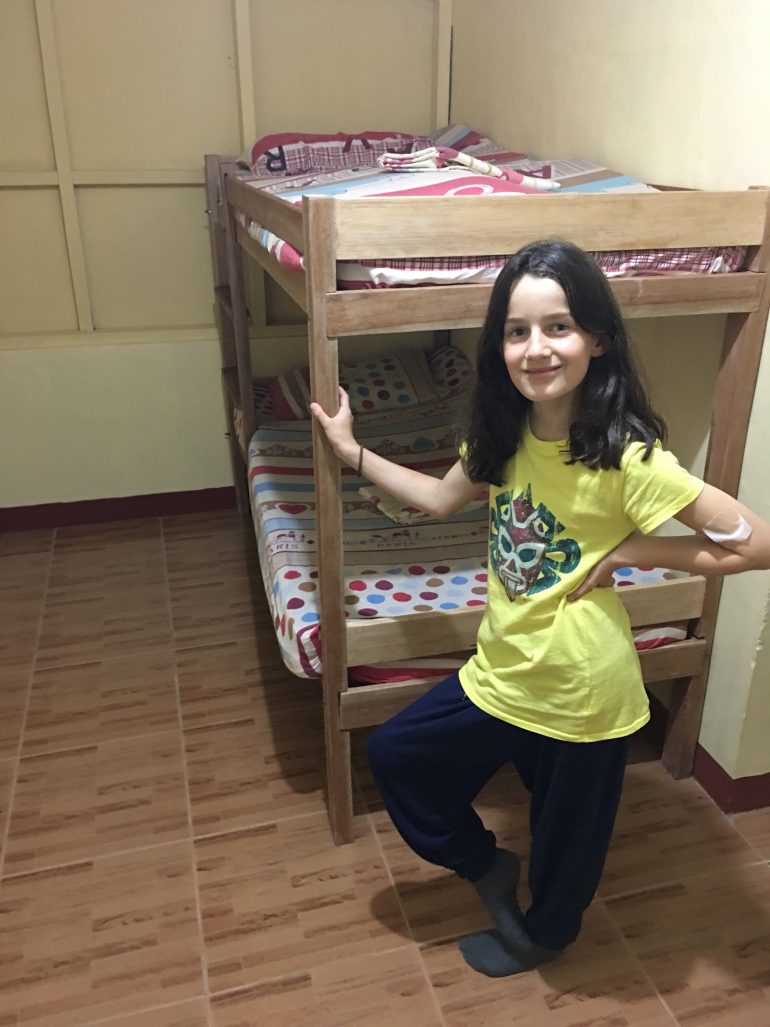 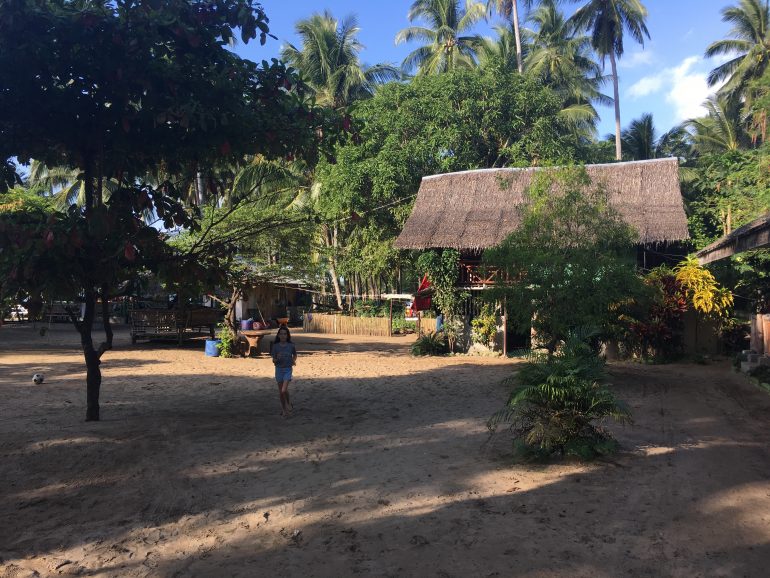 Where to begin? Perhaps just getting there and the first night. The drive from Puerto Princesa was perfect: in the sense that it was dusty, reckless, bumpy, noisy, punctuated by endless stops at roadside stores for water, SIM cards, food, everything; and lined by the most fabulous, lush verdant landscape you could ask for: endless palm trees, rice paddies, coconut plantations and local houses mostly made from bamboo and palm, framed by mountains on one side and ocean on the other. What’s great – or at least, revealing, is the fact that most of the road and shop signs are in English, despite Tagalog being pretty much the main language, particularly in villages. It’s like Asia translated- you can finally understand what the stores are peddling, pawning and promising…..

Our van companions were lovely New Zealander Michelle, a hugely smiley and friendly engineer, and sweet Chinese Zoey, on holiday from her jobs in customs and excise on Shenzhen, both to whom the girls immediately warmed. Just under two hours later, at sunset, we turned off the main road and entered mud road territory, in the fading light, to arrive at our camp accommodation. Crunch time…! We were in the second accommodation area, a few minutes walk from main camp. Bamboo huts, a slightly dingy looking outside sink and enormous squashed spider welcomed us into our new abode, which consisted (entirely) of two simple bunk beds with mattresses the depth of a few tired yoga mats, one table and 4 hooks: no cupboard, no shelves. With that, a mini bathroom with a suprisingly decent loo (I had been threatening fetid sewage infested long drops to the girls) and the infamous bucket shower we had heard about. No basin, and no hot water, obviously- but there was cold, and it ran! Very simple, but clean and actually rather better than I’d expected.

Dumping our bags we went straight to main camp for a vegetable fritter and rice supper, meeting some of our new crew: Miko, our general camp manager, a super friendly, laid back dude with a bunch of tattoos, Jude, a temporary kindergarten helper along with Helen and our lovely cook, among others. Apart from the main seating area, that doubled up as dining room, meeting area and karaoke centre, there was a small common room, with a little washing up area, complete with the occasional tame cockroach, shared fridge and toaster, a few books and stationery supplies; a notional hand washing area; and then three small huts, one with a hammock, for resting, sitting, chatting. All of this, against a backdrop of perfection: clear blue ocean, palm trees, golden sand, wooden fishing boats. Dreaming about daily morning swims and runs, the sting in the tail was soon delivered: ravenous jelly fish, and bags of them, coupled with rampant, virulent sandflies. Crushingly, this was not going to be a sun bathing paradise: but in all truth, that wasn’t what we had come for in any case.

We got Owen, a long-standing volunteer who had been at the camp for over 2 months to walk us back in the dark to our room, unfamiliar as it was then, and the room organisation began. First up, allocation of bunks, and mosquito net installation. Making a show of being deeply experienced with such matters as the girls agonised over which bed to sleep in (cracks and holes in the walls being the main cause for alarm), the nets were put up without too much difficulty (duck tape, hooks, imagination), the holes were filled with loo paper and the crevices were zapped with one of our multiple bug sprays. Alegra then got hold of said bug spray and thought it would be an excellent idea to exterminate all living creatures inside the entire room, ourselves included, and possibly all others in a vicinity of a mile or two. Fearing impending death, I had the marvellous idea of opening the door and leaving the light on to ventilate for a moment, whereupon the largest flying dog-bat-scary-thing (ie massive cockroach) I’ve ever seen flew in the room, producing the most almighty screams Tigman village have ever heard and near hysteria from the three girls. Out came the bug spray in a mad attack on the cockroach to little initial avail, and I pretended that everything was fine and marvellous, all the while thinking WHERE IS ALBERTO WHERE IS MY BROTHER but my bravery and the Aussie-purchased Raid finally had its evil way with the poor creature and peace was restored. Until, of course, we had to go outside to brush our teeth. No sink in the bathroom, obviously, and brushing only with bottled water. The girls still with roachy jittters, every shadow and noise seemed a potential deadly enemy, but they managed, I managed, and we crawled under our nets at 9pm for a surprisingly good night’s sleep.