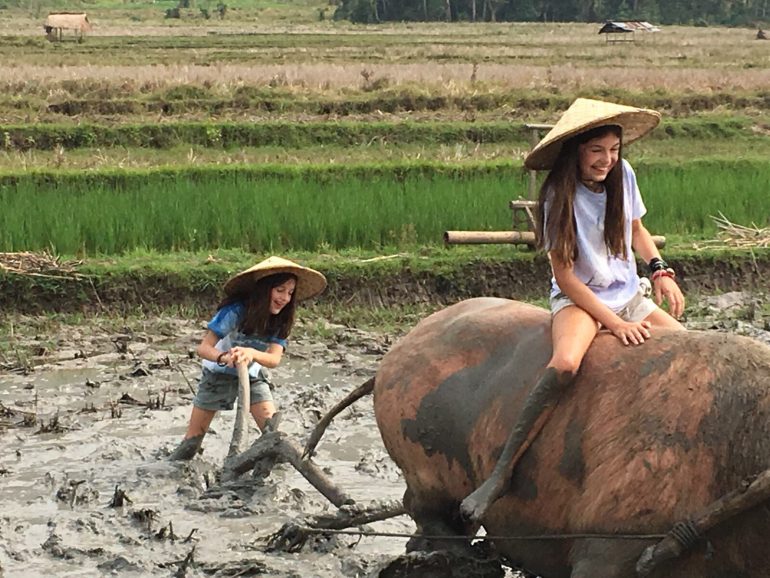 Our final stop before making our way to Cambodia, now into our last month of travel, was a hugely enjoyable visit to a rice farm cooperative, known as Living Farm, about 15 minutes outside Luang Prabang. Originally just a small organic farm enterprise, it now supports seven families who live on the farm, employing agriculture students to learn about farming and show rice farming to tourists, which has turned out to be rather more lucrative than organic farming. As a result, the farm is also able to support the local village, proving funds to restore the local temple, and offering free English classes in the evenings to all who wish to attend. Had we had more time, we would have all stayed to help with the lesson- they are always grateful for extra native speakers to lend a hand.

We were fortunate to be the only visitors that afternoon, and we had the very amusing Den to tell us all about the 14 steps of rice farming. They can normally do 2 crops of sticky rice per year, occasionally 3, depending on how much water they can muster. Rice grows slowly in the dry season- normally at least 3 or 4 months. Sticky rice is the staple here: it has a much higher calorific content than long rice, and this keeps the people fuller for longer. They eat it for breakfast, lunch and supper- savoury or sweet, bring it on…

So then, we doffed our rice farmer bamboo hats, took off our shoes, and got ready to get our hands- or rather, legs- dirty. The first step is to decide which rice to plant. At least 10% is kept back from the last crop for this, but they first have to sort the wheat from the chaff, as it were- the rice likely to grow well, and that which might not. This is dependant on its volume, many times. They prepare a bowl of water, and drop an egg in it. To this is added salt until the egg floats- the correct proportion of salt to water. The rice is then added to the bowl. If it sinks, it is worth planting. If it floats, it is lesser quality and will do for chicken feed.

Once separated and rinsed, we take the rice to the paddy field to plant in a specially prepared field. This means a spectacular muddy mess up to our thighs. We rather gingerly step in and immediately sink into warm muddy goo, amid the girl’s alternate delighted giggles and gasps of horror. We make a sort of mud platform that just sticks out of the water and create a bed for the rice. In it goes, for one month, to germinate under the sun.

Then, to the plough and Rudolph, the farm’s favourite water buffalo. This was a highlight the girls are unlikely to forget any time soon. Water buffalo are used to plough the paddies, readying them for planting the germinated seedlings. Attempting to guide the plough, the girls leapt on the back of the buffalo with glee, covering themselves in mud, as we took turns at shouting huhuuuu huhuuuuu to make poor long suffering Rudolph circuit the paddy, trudging thigh deep through warm buffalo poo and mud, moving the plough from side to side to break up the claylike mud and roots below. This is not easy. At all. It was all we could do to stay upright amidst the giggles and the effort – Siena and Alegra so nearly fell headfirst into poo. We were rather sad they didn’t, as the photo would have been too good…..

Next stage was planting the seedlings. In groups of four or five plants, walking in rows and always backwards through the mud, you plant each clump about 10 cm apart, all the while singing a traditional Lao song to encourage a good harvest, of course.

Seedlings planted, Den showed us the next paddy which had plants that were about 2 months old. Half grown, you could see how the rice was beginning to form. He explained the water drainage system: a system of terraces, the paddies need to be drained and refilled depending on the age of the rice at the time, using a simple but effective system of bamboo pipes that they block or unblock with mud as required. Then, in the next paddy with rice of about 3 or 4 months, out came the machete and scythe and we cut the plants, leaving them to dry on the paddy ready for threshing.

Absolutely filthy and boiling hot, we were then able to clean off the mud and get to the next stage: threshing. The girls again leaped at the chance to grab enormous sheaves of rice and thrash them, rather than thresh, onto bamboo boards in order to remove the rice from their stalks. Then for the next stage of separation-using the now brush like stalks, and a special bamboo fan, we managed to clean away most of the stalks and leaves from the as yet unhusked rice. And still there was more to go…. such a lengthy process for something that they can sell for just one dollar per kilo.

Keeping aside the mandatory 10% for next year’s crop, it was time to remove the outer husks using a pestle and mortar and a quick hand. Obviously this is done with machinery where possible, but there are still many villages that rely on this ancient method, having little or no electricity. It is damn hard work making that enormous wooden pestle move, I tell you!

Then we needed to separate the rice from the husk using a series of bamboo trays and surprisingly challenging circular movements. Always separated by the women, traditionally no Lao woman would be able to marry until she had mastered the rice separation. It didn’t look like any of us would be marrying any time soon…..

Finally, it was time to cook and eat it. Using a traditional bamboo steamer over a brazier, which people genuinely still use in their houses and on the streets, the previously soaked sticky rice cooks for half an hour and ta-da….. we can eat our work! It’s delicious, sticky, and extremely filling. As Den said, persons get fat belly if eat sticky rice and not walk. Fat belly. 💛

Fat bellied then, it was time to pack and say goodbye to beloved Luang Prabang. We will be back! 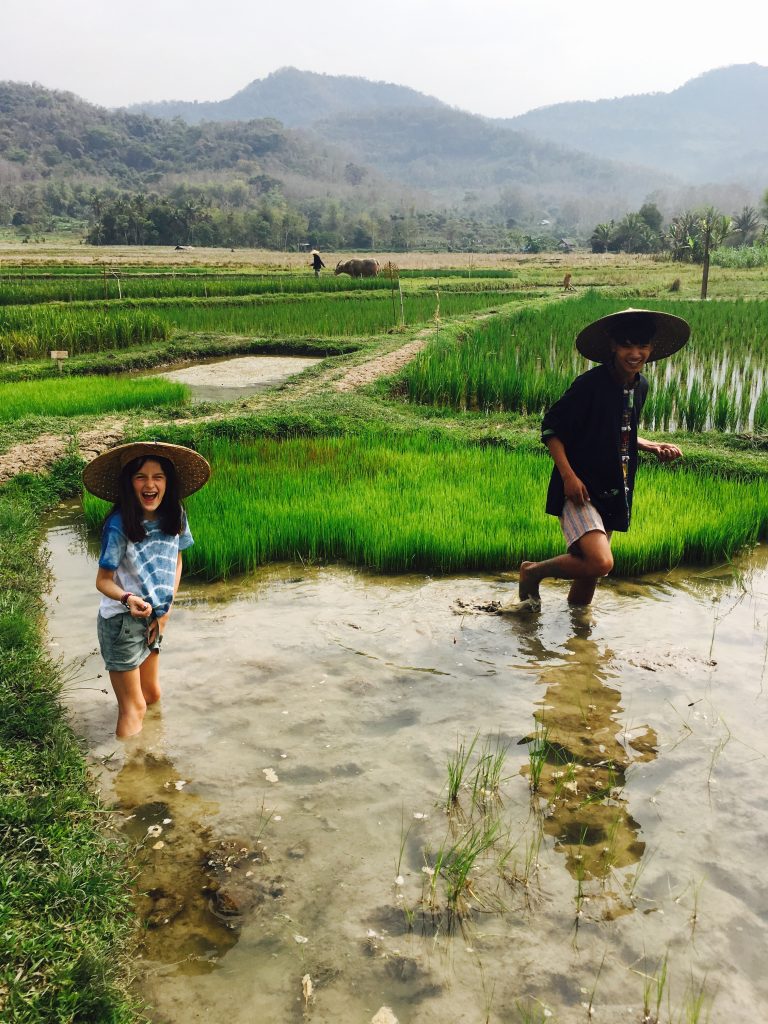 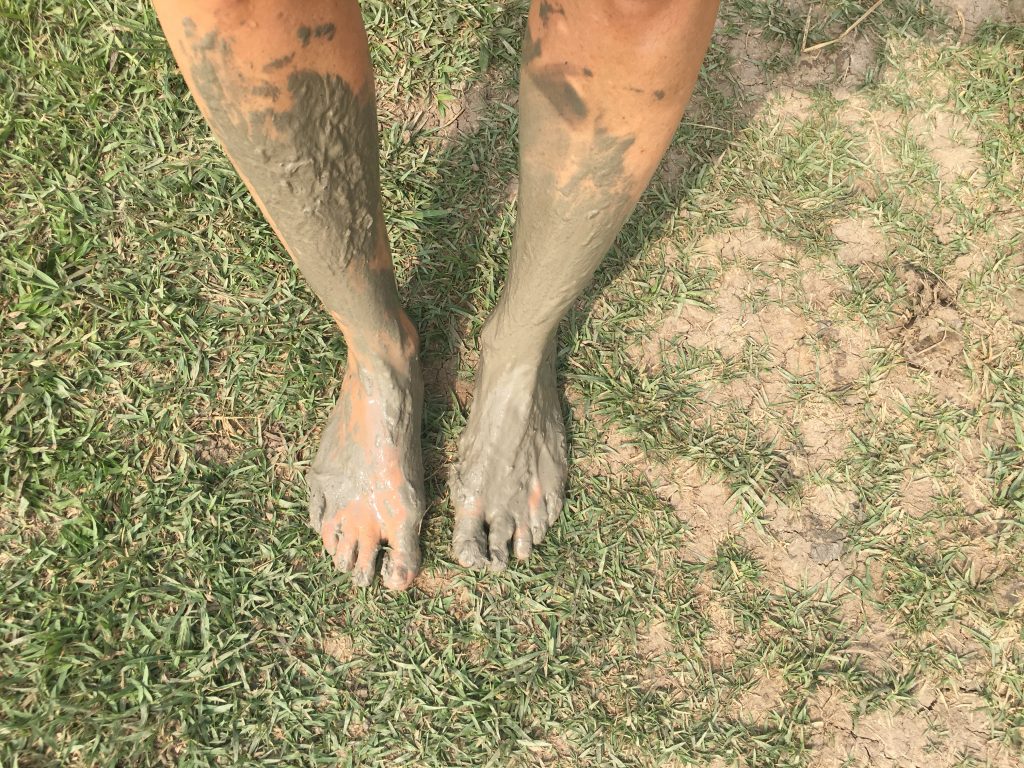 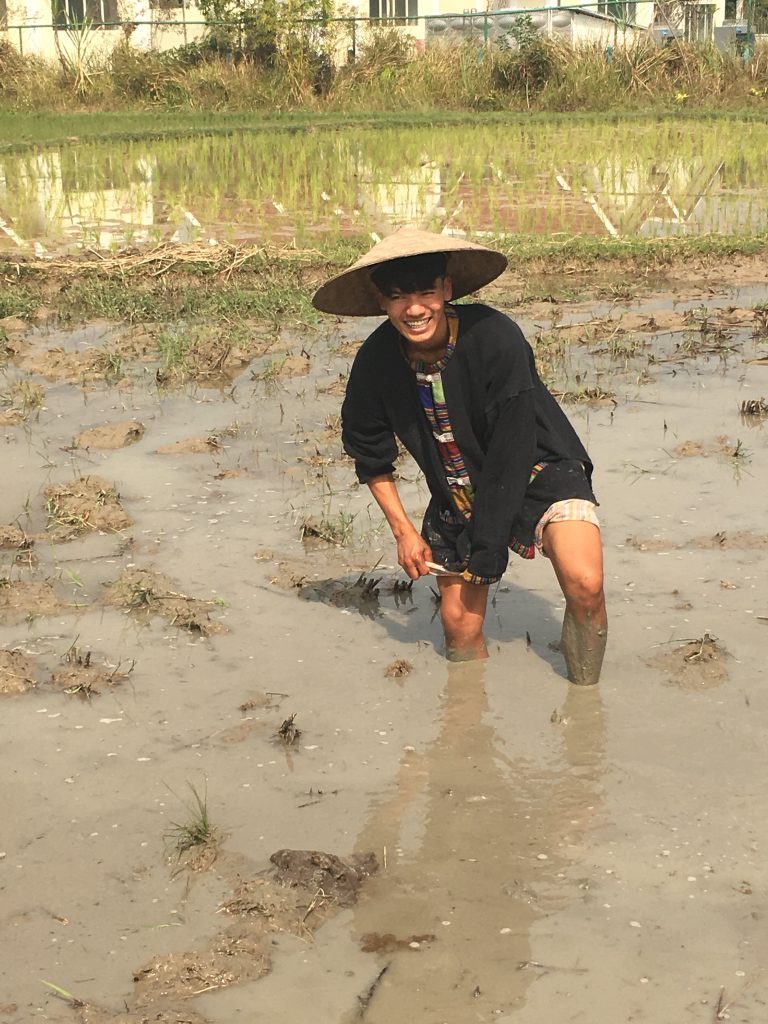 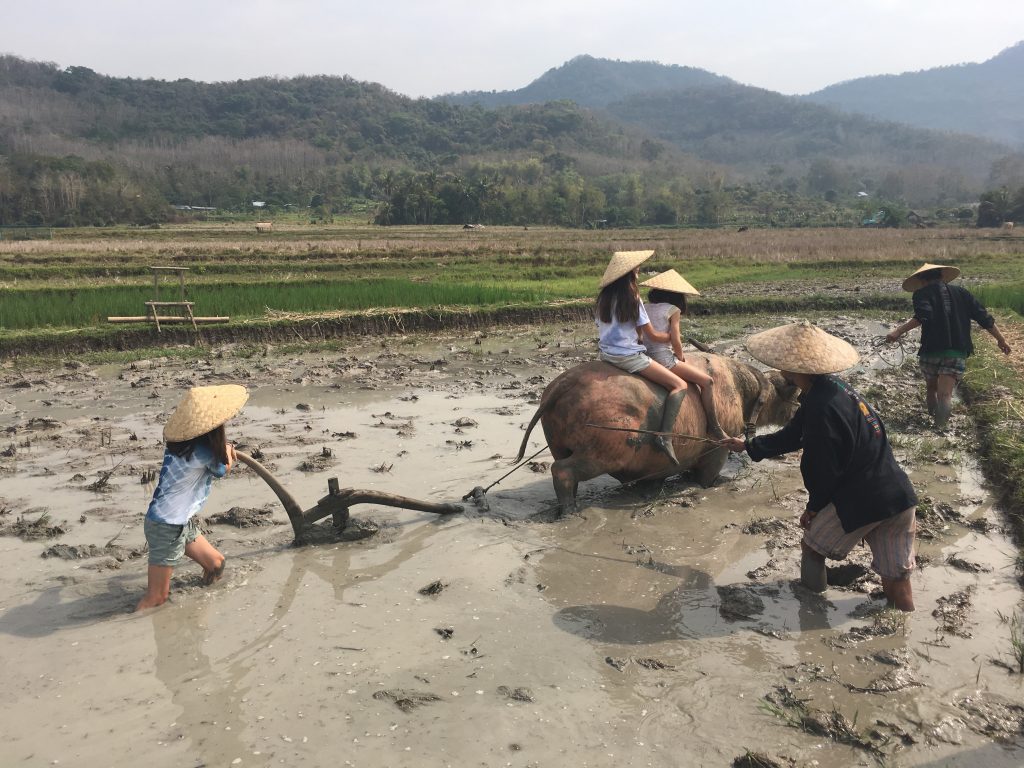 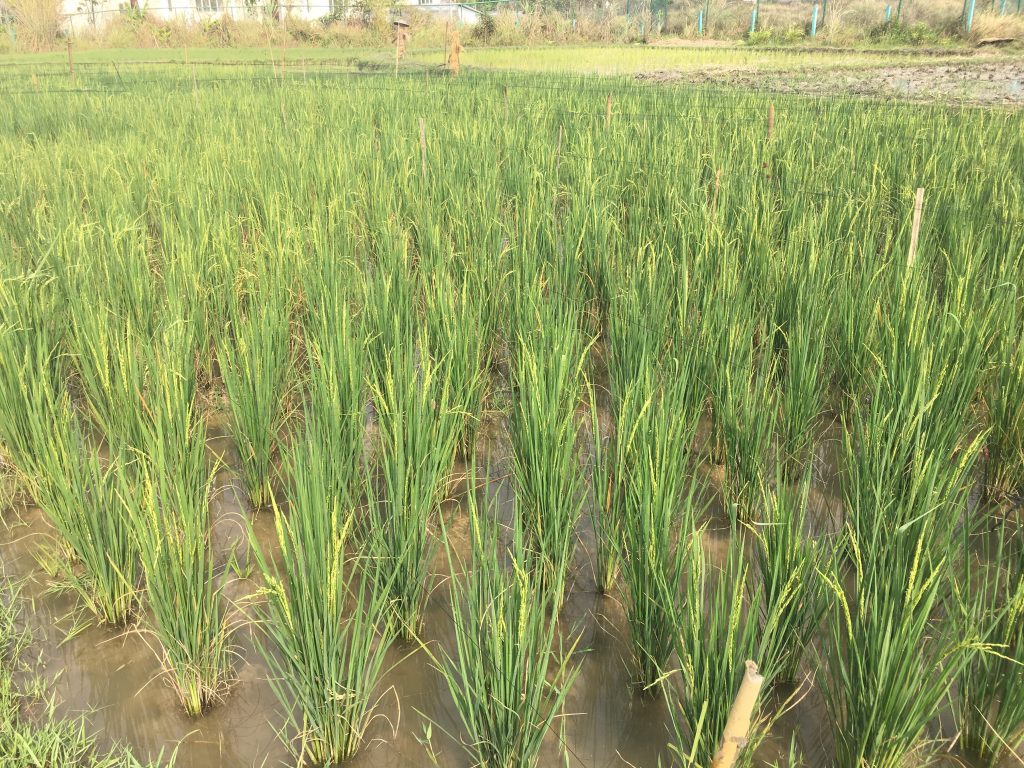 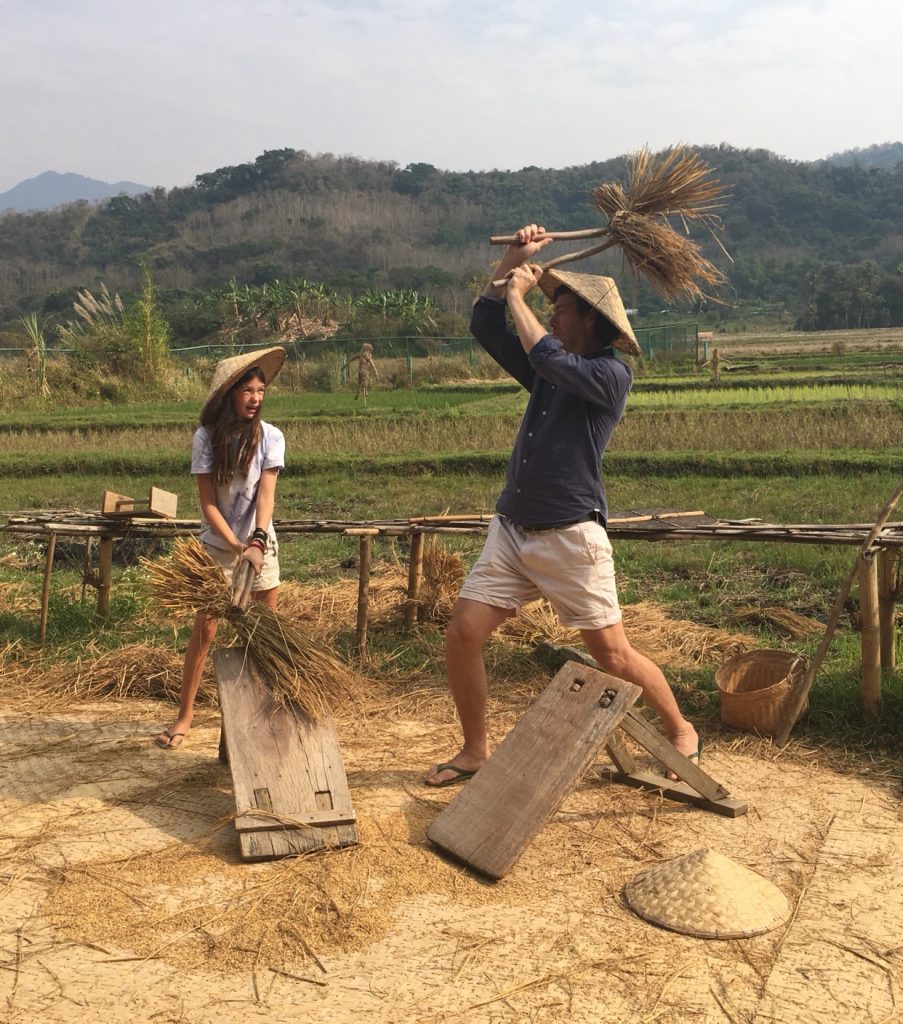 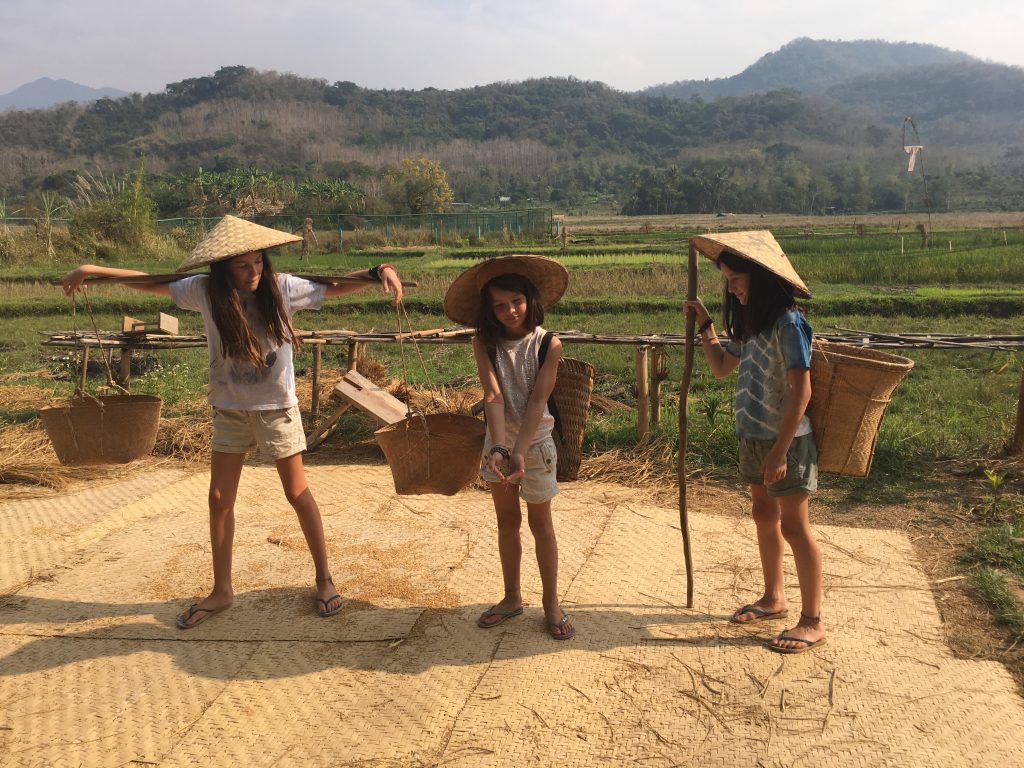 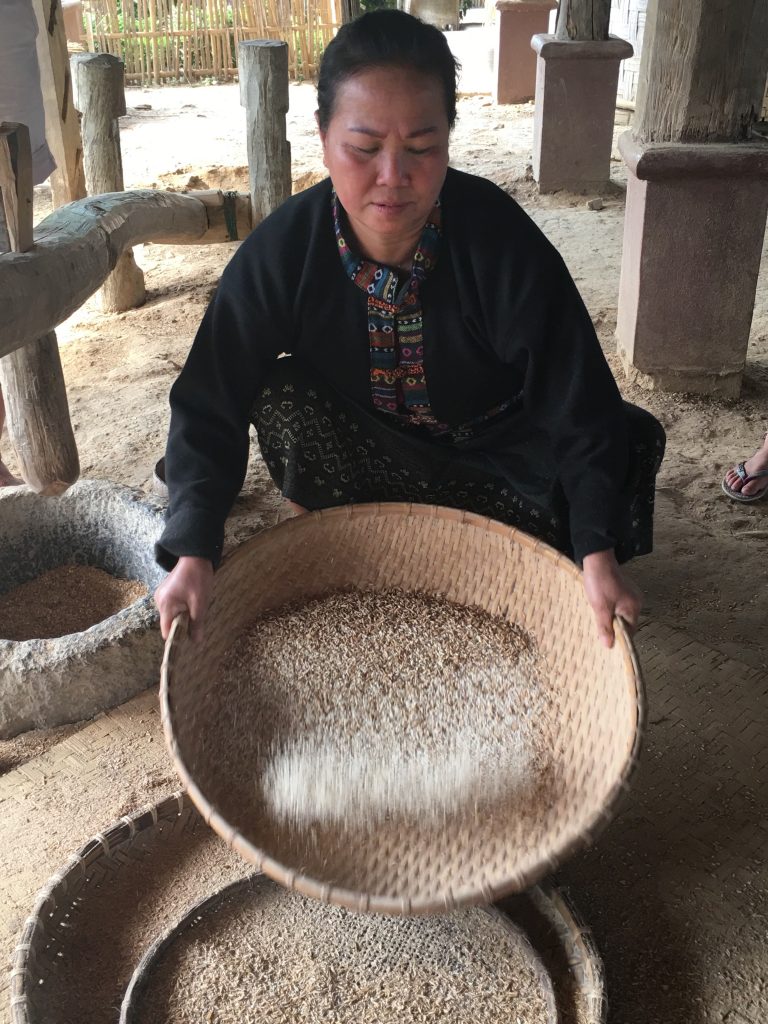