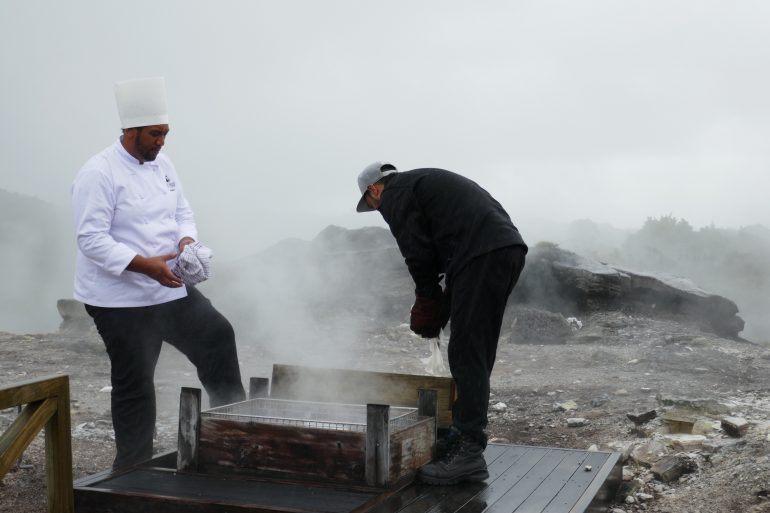 Geysers, tourist buses and massively dodgy motels. That was the sneaking pre-visit suspicion, which was more or less played out, but nevertheless geo-thermal Rotorua was certainly worth a visit. Granted, the weather was no friend: we arrived as the jaws of one of the worst tropical storms in recent years clamped down onto North Island. It wreaked literal havoc for the next 36 hours, uprooting trees, causing massive floods, coastal evacuations, and closing roads…. and we were slap bang in the eye of the beast!

The day started with a tour around Te Puia, principally to visit the fabulous Pohutu geyser. Of all the purpose built centres we investigated to visit, this seemed the best designed and located. There is an enormous amount of Maori history and culture in the area, so we took a deep breath and went for the whole whammy: a (slightly pointless) guided tour, which encompassed a tour of the geysers and booking mud baths, which were amazing, as well as a look at some traditional Maori weaving and wood carving, a failed attempt at seeing some Kiwis (being nocturnal, they had no interest whatsoever in showing their little beaks to is in the middle of the day), and a traditional Maori ‘hangi’ lunch. This was an unexpected highlight: they cook a traditional, simple lunch of chicken, corn, cabbage and Kumaru, sweet potato, all steamed in a special basket using a natural steam vent opposite one of the smaller geysers. Genuinely delicious and rather magical and mysterious – food cooked by the centre of the earth!

As the rain continued to pelt it down, we missed out on a proper walk around the rest of the centre- on a good day it would have been beautiful- but ended with another unexpected highlight, the Maori performance. Expecting excruciating touristic mush, it was actually informative, and entertaining as they performed a selection of traditional, and surprisingly beautiful, Maori songs, and of course, some Haka. The girls were deeply disappointed that Alberto didn’t jump on stage for some Haka audience participation 😜.

Next stop, a trip to the Hiking Store to buy proper, reassuringly expensive waterproof jackets and a walk amongst the canopies of Rotorua’s wonderful redwoods, before braving our absolutely revolting, overpriced motel from hell. Won’t even bother writing it’s name it was so rubbish. Whatever. But it was still fairly amusing nevertheless.