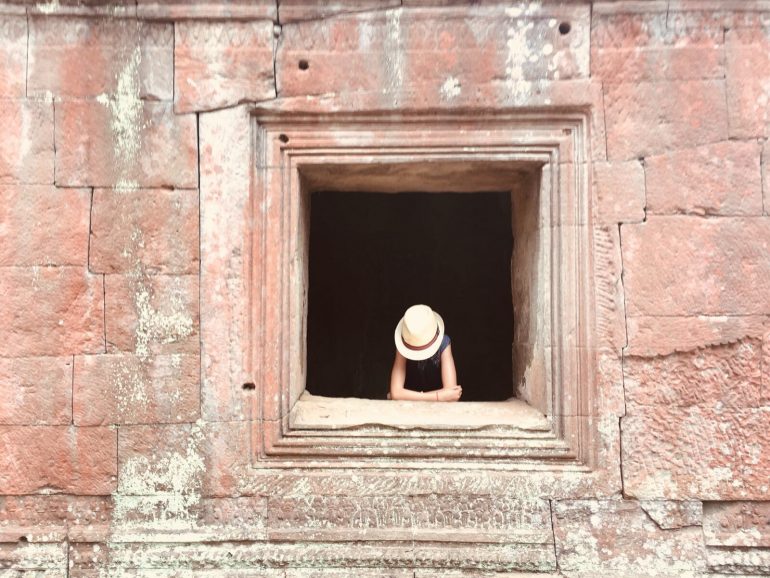 Angkor – still a heaven on earth 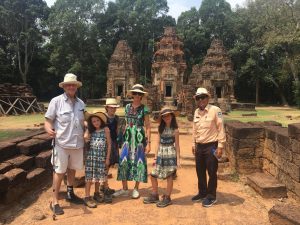 Alberto and I had last been in Angkor 12 years previous, and fell in love with every corner.  It was a magical place of smiling people, deserted temples that apart from Angkor Wat itself, were not hugely visited by the hordes.  We spent hours sitting alone staring, in my case, or drawing, in his, at the truly heartstopping wonders of this ancient kingdom.  Coupled with a stay at the newly re-opened FCC club, and gentle meanderings through the still rather small and lazy Siem Reap, recalling times of colony and gin & tonics, we knew we would need to return with kids one day. 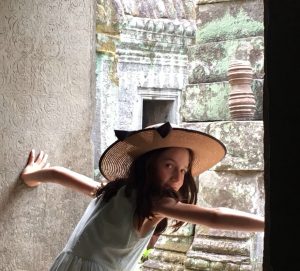 Return, then, we did.  We knew Siem Reap would be wildly different after 12 years, but it was more than a little sad to see streets taken over by hotel megaliths, built principally for enormous Chinese tour groups, and further scores of rather nasty hotels and ‘pub street’, presumably to cater for dubious English tastes. We were set to try a different hotel this time, the Ladear Boutique.  I had scoured Booking.com for a fairly priced but well reveiwed spot…… but lo and behold, not all that glitters is even remotely gold. This place was rather more sewage and gas ridden shizer hol, as well as quite frankly, unfriendly and noisy. After 5 hours of windy boring road, this was dispiriting, but nothing that a large drink and an Amex cannot solve. On the phone we got, and rang our trusty old friend from 12 years ago, the FCC Siem Reap, the sister establishment to the Phnom Penh hotel, but very different. They couldn’t have been more marvellous- honestly, such a contrast. They arrived within minutes like knights in shining armour to collect us from our (not actually that bad) predicament, and Dad was safely delivered into a very nice suite (although the girls were miffed in the extreme that this had not been allocated to their royal highnesses obvi) while the rest of us were happily shown into lovely, simple, contemporary rooms with dark wood finish and looking out over the pool- for hardly any more than our now cancelled hotel. Happy memories from our previous trip came deliciously flooding back as we sat having another cocktail, this time without any sinister scuttling in the vegetation Ladear-style, overlooking the Mekong once again, ready for Angkor action the next day. 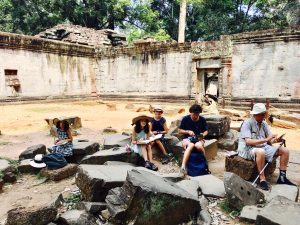 Breakfasts of eggs benedict prepared us for a hot day of temples – Alegra of course was more than concerned about this.  We had revved them up with tales of Tomb Raider and trees growing through walls, and bribed them with new hats, so for the time being, we were in the sightseeing clear.  However, accompanied by history-mad father, and architect father, the girls weren’t going to get away with a quick glance here and there.  We had to see LOTS, and we adults at least, loved it.  A tuk tuk drive takes you out to the temples and you decide what route you want to take.  We preferred to start with the lesser visited ruins first, mixing them up with the more typical sights: Bakong, the first temple constructed by the Kmer rulers towards the end of the 9th century with its three concentric enclosures separated by two moats, from east to west. It must have been a truly breathtaking sight in it’s heyday.  As difficult as it is to reconstruct from ruins, as evocative as they may be, it still has such magic.  And the model they’ve made opposite helps too :).

The million things we learned, and promptly forgot about each temple’s iconography obviously started here, but you won’t miss images of the triumvirate Trimurti of Brahma, Vishnu and Shiva; Indra the elephant god; Ganesha, son of Shiva; the splendid Naga heads lining moats; thunderbolts like lotus flowers identifying Indra; plentiful water spouting fertility lingam, and so, so many more…!  We followed by visiting Preah Rup, Banteay Srei, Bayon, to mention but a few, and battled with (principally Chinese, sorry but true) crowds, selfie sticks and plastic bags to see Angkor Wat and Baphoun at sunset. 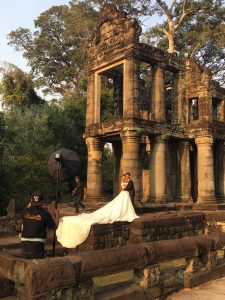 Ta Prom, otherwise known as the Tomb Raider location, has become just that: a film location, complete with arrows pointing you in a direction, platforms, more selfie sticks…. no longer the deserted temple we visited 12 years ago, Lara and the tourists have very much arrived and extensive renovations are underway. Nevertheless, it still remains one of the most romantic, glorious ruins I’ve ever seen. Sprung trees have taken over, and precarious towers tilter, destabilised by the fabulous folding roots that invade their structure. Lintels and tympani are held up now by luck, or a few bits of steel here and there, while green moss eats away at the stone. Still pretty great really, particularly when you ignore the arrows, sit down in an interior courtyard on one of the many stones that were once grand columns, away from the river of people, listening to the jungle, watching monkeys and butterflies, feeling the heat all around while a few hammers chipping away in the background…  A game of hide and seek worked wonders, and we did in fact get nicely lost more than once, with so many doors unpassable. Endless photo opportunities: for us, and for more than one bride and groom!

We had more than one great dinner, but a particularly memorable place was Haven, a social enterprise and training restaurant for vulnerable adults – of which there are so many in Siem Reap, exposed to drugs, poverty, abuse and prostitution.  Another was a divine place with a garden/ terrace but I can’t find it’s name!  If I do, we shall repost. In all, a very special time before setting off, once again alone, to Sihanoukville, ready for our beach hut #girlpoweragain! 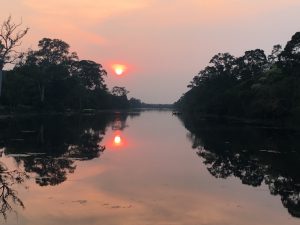 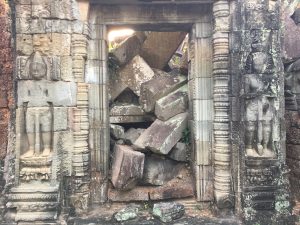 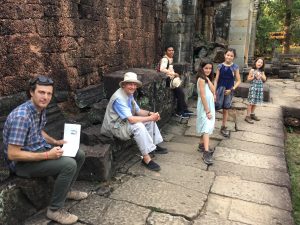 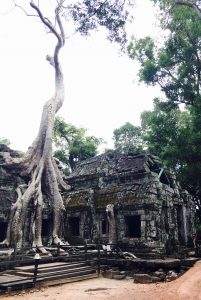 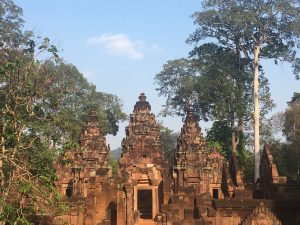 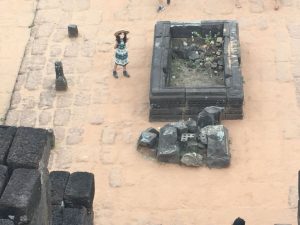 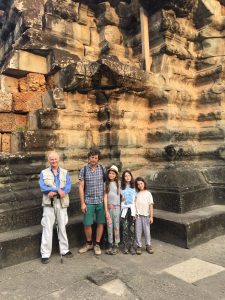 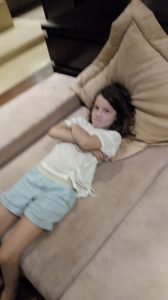 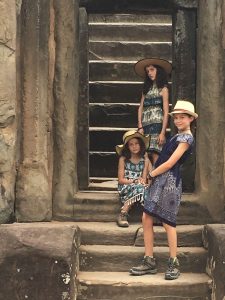